First, apologies to those waiting the enter the competition this year. We’ve had some minor website issues with the entry form, but we’re almost there and should make an announcement in the next few days.

Mainly, though, we’re very pleased to provide some good news for previous winners of the James White Award. 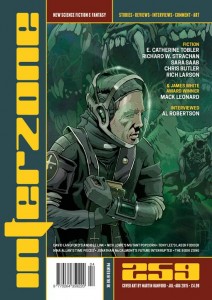 The 2015 winning story, “Midnight Funk Association” by Mack Leonard has been published in Interzone no. 259 – and very fine it looks too.

In addition, as has become something of a tradition for James White Award winners, the story was translated into Italian (as “Nei Pressi del Fiume Prosciugato dalla Diga”) and included along with competition-winning stories from around Europe in the anthology La Maledizione.