We are pleased to announce the winner of the 2017 James White Award is:

“The Morrigan”
by Stewart Horn

Commenting on the winning story on behalf of the judging panel, David Gullen said:
“The Morrigan works very well, a very tight piece of writing, confident and accomplished. It breaks the rule on colloquial speech and not only makes it work but is stronger for it. An original take on a very old tale with good pace, and sense of time and place.”

Stewart’s story wins £200 and will be published in a future issue of Interzone.

This year the judges also chose to give a special commendation to:

“May the Pain Guide You Home”
by Daniel Roy

Award Adminstrator Martin McGrath said:
“Daniel’s story scored highly with all the judges, it packs a powerful emotional punch in a well-written and tightly told story.”

The winning story was chosen from an entry of almost 200 entrants this year.

Commiserations to the authors of the other shortlisted stories:

although they didn’t win this time they made the judging process difficult and it was a significant achievement to reach this stage in the competition.

Thank you to this year’s judges: Lorna Gibbs, David Gullen and Konrad Walewski for their time and the care they gave to the judging. Thanks, too, to the team behind the scenes that make the award possible and to all those who have supported the Award.

The James White Award also thanks TTA Press and editor their Andy Cox and the British Science Fiction Association for their continued support.

We have had some difficulties with the organisation of this year’s award that have caused significant delays in making announcement and so we thank everyone who entered for their patience. We’ll be announcing some changes to the competition next year in the hope of avoiding a repeat. These will be announced on the website soon.

The James White Award will reopen to entries in September 2017.

We are pleased to be able to announce the shortlist for this year’s competition.

The stories that have made it through to the final selection are:

The winner will be announced next week.

Apologies to all this year’s competition entrants for the delays in getting to this stage. Stories not listed here should be considered released for consideration in other markets.

This year’s judging panel are:

Lorna Gibb
Lorna is a novelist, short story and non fiction writer. She has published two biographies, Lady Hester (Faber 2005), the Sperber shortlisted West’s World (Pan Mac 2012) and the critically acclaimed novel A Ghost’s Story (Granta 2015), as well as short fiction for literary magazines and Radio broadcast and the award winning memoir, ‘The Two Gardens’. She is currently writing a book on Childlessness, commissioned by Granta. Lorna lives in Hertfordshire with her husband and three rescue cats, is represented by Peter Straus at RCW Lit Agency and lectures part time in creative writing at Middlesex University.

David Gullen
David is a white African writer whose short fiction has appeared in various magazines and anthologies. His work has won the British Fantasy Society short story competition and his collection, Open Waters, is published by Exaggerated Press. In 2016 he was also a judge for the Arthur C. Clarke Award. His SF novel, Shopocalypse, is due to be re-issued by NewCon Press this summer. David lives in South London with the fantasy writer Gaie Sebold behind a small forest of tree ferns.

Konrad Waleski
Editor, writer, anthologist, literary critic and translator, Konrad is a prominent figure in the Polish Science Fiction and Fantasy scene. Hie is co-founder of, and editor for, the Magazine of Science Fiction & Fantasy in Poland. He has translated works such as Synners by Pat Cadigan and Magic for Beginners by Kelly Link and his anthologies include three volumes of Kroki w nieznane (Steps into the Unknown) and Wielkie dzieło czasu (Great Work of Time). He currently lives in London.

The James White Award is pleased to be able to announce the longlisted stories for this year’s award. These are:

Authors of other submissions can consider their stories released.

We hope to announce the shortlist within two weeks and the winner shortly afterwards.

Note that, at this stage, the stories are still being judged using our anonymous system, hence no authors’ names can be included at this time.

The award administrator, Martin McGrath, apologised to the delays in this year’s competition: “We know it is frustrating for authors who are waiting for a response and we’re taking steps to ensure that this doesn’t happen again in future. We will be announcing changes to the competition’s timing for future competitions before opening for next year’s submissions. Thank you for sticking with us.”

With apologies to those who have entered this year’s competition, we are sorry to announce that the announcement of this year’s James White Award winner has been delayed.

The longlist will announced shortly after Easter and the shortlist shortly after that. We are working to complete the judging as quickly as possible.

We intend to announce the winner by Friday, 19 May at the latest.

Thank you for your patience.

We are pleased to be able to confirm that David Cleden’s short story, Rock, Paper, Incisors will be included in the next issue of Interzone (no. 267) with gorgeous artwork by Martin Hanford (see above). If you’re not already a subscriber to Britain’s best and longest running science fiction magazine, you can find out more here. 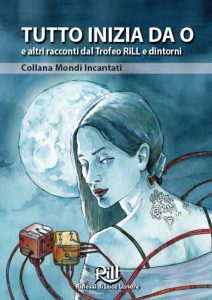 Also gorgeous is Tutto Inizia Da O (It All Starts With O is my, possibly wildly inaccurate, attempt at a translation), this year’s anthology of competition winners from the twenty-second Trofeo RiLL – an Italian short story competition. As has become tradition, this anthology also features the winning stories from sister competitions around the world, including the James White Award winner (and Ireland’s Aeon Award; South Africa’s Nova Short Story Competition; Spain’s Visiones Award; and  the Australian Horror Writer’s Association Short Story Competition). So, we’re equally pleased to be able to announce that David Cleden’s story is in this collection as Carta, Sassi, Incisivi, translated by Emiliano Marchetti. You can find out more about this anthology and buy copies of It All Starts With 0 (and previous editions) for just €8.00 by clicking here.

Congratulations to David – and we hope you’ll check out his story in either English or Italian, or both.

Meanwhile, entries for this year’s competition are already arriving at a healthy rate, so we’re looking forward to another exciting year for the James White Award.

Congratulations to this year’s winner of the James White Award:

David will receive £200 and his story will be published in a forthcoming issue of Interzone, the UK’s leading science fiction magazine. The winner was announced at the BSFA Award Ceremony held tonight at Mancunicon.

Commiserations to the shortlisted finalists:

And thank you to all the authors who took part in this year’s competitions. As noted before, we received a record entry and the competition was close.

“The James White Award was created not just in commemoration, but to celebrate and encourage fresh, exciting voices in genre. So the judges were delighted this year to find such imaginative stories amongst the shortlisted titles. The winning story was not only well-realised, but had a genuine and striking spark of originality that piqued the curiosity of the judges. With its cohesive storytelling and confident execution, David Cleden’s “Rock, Paper, Scissors” was a clear winner for the whole panel.”

Thank you to our judges, to those who contributed to the work of the award, everyone who has donated this year and to Interzone and the BSFA for their continued support of the award.

The James White Award will open to entries again in June 2016. Keep an eye on this website or our Twitter feed @jameswhiteaward for more details.

We are pleased to announce the shortlist for this year’s James White Award.

“Deadly Dance” – Trina Marie Phillips
“If Only Kissing Made It So” – Jason Kimble
“Let the Bells Ring Out” – Morgan Parks
“(Perhaps The Answer Is) That We Question At All” – Matt Dovey
“Wreckwalkers” – Jon Lasser
“Rock, Paper, Incisors” – David Cleden

Congratulations to the shortlisted authors and thanks to all those writers who submitted their work.

With over 350 entries this year, the competition received a record number of stories and we’d like to thank all our judges and readers for their contribution.

Thank you too to the BSFA and Interzone for their continued support and to all those who have made donations that help us keep the competition running.

This year’s winner will be announced next Saturday, 26 March 2016 during the BSFA Award Ceremony (starting at 17:30) at Manunicon, this year’s Eastercon. If you can’t be in Manchester, we’ll update the website shortly after the official announcement or you can check our Twitter account (@jameswhiteaward).

The long-listed stories for this year’s James White Award have been announced. Below are the titles of the stories that made it through the first stage of judging. This year’s award received a record 354 entries, so the authors who made it through to this stage have already seen off some very strong competition.

As the anonymous judging process is still ongoing – the winner will be announced over the Easter holidays at the BSFA Awards – we are not in a position to attach authors’ names to these stories at the moment. However, if your story is not listed here, you should consider it released for submission to other markets.

The final stage of the judging – picking the winner – is now taking place. The final shortlist will be announced soon.

We are pleased to be able to announce the team of authors judging this year’s competition.

RUTH EJ BOOTH
Ruth EJ Booth is a writer and photographer based in the North-East of England. Her short story “The Honey Trap” won the 2014 BSFA Award for short fiction. A semi-retired music critic and magazine editor, her non-fiction work has appeared in The Independent and Kerrang! Magazine, while her fiction and poetry have been published by NewCon Press, Far Horizons magazine, and most recently in Fox Spirit Books anthology Winter Tales.

IAN SALES
Ian Sales is the author of the critically acclaimed Apollo Quartet and the Age of Discord series of space opera novels. He won the 2012 BSFA Award for Adrift on the Sea of Rains, the first of the Apollo Quartet, which was also nominated or the Sidewise Award. He is a frequent reviewer and critic and was nominated for a BSFA non-fiction award in 2011 for his work on the SF Mistressworks website.

NEIL WILLIAMSON
Neil Williamson is a writer and musician based in Glasgow. His debut novel, The Moon King, was nominated for the 2014 BSFA Award and the 2015 Holdstock Award. His short story “Arrhythmia”, shortlisted for the BSFA Award in 2010, features in Secret Language, a new collection forthcoming from NewCon Press in 2016.

The winner of this year’s James White Award has been announced at the BSFA Award Ceremony at Dysprosium 66, this year’s Eastercon.

The James White Award would like to thank our judges, Stephanie Saulter, Dave Hutchinson and Gareth L Powell, our volunteer readers, the BSFA and Andy Cox and Andrew Hedgecock from Interzone for their support.

Thank you, too, to all those who entered and those who made donations to support the work of the award.

The Award will re-open for entries in June.